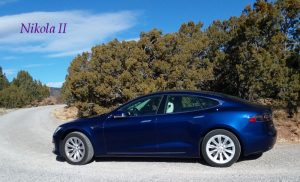 These are the questions that I get asked most frequently, as a Tesla owner.

I love it. Best car I’ve ever owned. Never going back to an ICE car.

How long does it take to charge?

The simplest answer is that I only think about this when I’m taking a road trip.

For normal use, including driving to Albuquerque, picking up friends, driving about 60 miles up to Santa Fe and toodling around, then back to Albuquerque and finally home, the battery holds plenty of charge. When I get home, I plug it in. By morning (actually well before morning) it’s full.

On a road trip, you plan your stops at Superchargers unless there isn’t one convenient. At mealtimes, we charge for 30-45 minutes. In between, we charge only as much as we need to get to the next Supercharger on our route, usually about 10-15 minutes. Just enough time for a bathroom break and to stretch our legs, maybe get some coffee.

At night, there’s no need to worry about finding a Supercharger. A destination charger is fine, because again, by morning the battery will be fully charged. For this reason, we do prefer to stay where there’s a destination charger.

We don’t know yet, because the earliest Roadsters are still going strong. Tesla originally estimated that the battery pack would have a life of about eight years. (Tesla’s estimates are generally conservative.) They now report that the battery packs are exceeding expectations.

Bear in mind that battery technology is improving really rapidly. When the Model 3 was first announced, Tesla said it would have a range of over 200 miles. Now there are two battery options for the Model 3: 220 miles and 310 miles. So by the time eight years have gone by, we may have the option to swap an old battery pack for one that has 400-600 miles range or better.

What about insurance? Is it expensive?

Well, yes, because the Model S is an expensive car. Insurance for the Model 3 should be comparable to that for a nice ICE car; say, a loaded Camry.

Actually, Tesla plans to bundle insurance into the cost of the car in the future. (Apparently some insurance companies are being a bit [cough, cough] unrealistic about the safety of autopilot and the value of the cars. For resale, Teslas are holding their value quite nicely, thanks.)

How many miles to the gallon does it get?

We get approximately 20,000 miles to the gallon. (Of windshield washer fluid.)