Our capitalist culture wants us to throw away any garment that is slightly damaged. Socks aren’t expensive – why not buy a new pair?

But there are costs to that practice that have nothing to do with our bank accounts. Costs to the planet, in the form of trash in the landfill, and carbon footprint for the manufacture and shipping of new socks, not to mention all the packaging (usually plastic) involved.

My favorite socks are still good, it’s just that they wore thin in a couple of places. So I decided to learn how to darn them. Darning is basically using needle and thread to weave new “cloth” over a thin spot or even a hole. I used colorful cotton embroidery floss to mend some small holes in other socks before tackling the large wear in this one. 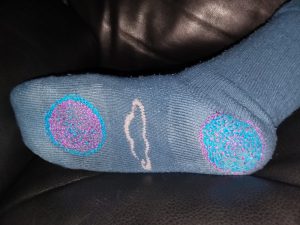 As I was darning those small holes, I wondered if anyone had ever done a “spiderweb” darn rather than a rectangular one. I searched, but didn’t find anything about a circular darn. So I decided to just try it. It was a little chaotic, but the result is kind of like a mandala, and I like it. Anyone who does Tai Chi knows that these areas of the foot are energy centers, so I like having circles there. And the weaving of these circles was a kind of meditation.

Little holes can also be covered with embroidered flowers or leaves, making mending into decoration. I like that. It’s even becoming a bit of a fashion statement to mend clothing with color, like a badge of honor, instead of trying to hide the fact that the clothing has done good service. It’s a reminder that we can still get good use out of things by mending them, instead of following the consumerist practice of tossing them and buying replacements.