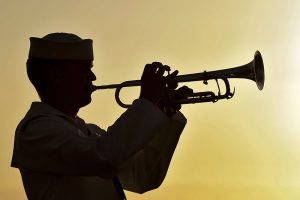 On Memorial Day of 2020, as the pandemic was really getting going and many were sheltering in isolation, a new tradition was initiated: Taps Across America. Assisted by publicity from Steve Hartman of CBS’s On the Road, the movement inspired thousands of Americans to pause at 3:00 p.m. local time and play “Taps.”

The idea came from the National Moment of Remembrance in honor of Memorial Day, an annual event initiated by Congress in 2000. Americans, wherever they are at 3:00 p.m. local time on Memorial Day, are asked to pause for one minute to remember those who have died in military service to the United States. Because the pandemic had us staying at home instead of getting together for barbecues in 2020, this was a way of doing something together to honor the moment.

It’s almost enough to make me want to learn to play the bugle. Though I am not a buglar, I do play the clarinet, and I intend to play “Taps” at 3:00 p.m. on Memorial Day this year.

Because it’s this kind of shared moment that can save our country. This kind of thing brings us together, at a time when so many forces are seeking to divide us. This kind of moment is what America needs to heal its collective soul.

While my own immediate family doesn’t include military veterans, my spouse’s family does, and I will be honoring them as well with my playing. I invite you to join me in this moment, if not by playing “Taps,” then by observing the National Moment of Remembrance.

And then you can get on with your barbecue.