This is an entry I recently wrote into a blank book, which shall henceforth be my garden journal.

The trouble with commercial gardening journals is that they set deadlines. You must write down everything the moment it happens! It becomes a documentation grind.

Well, I putter in the garden to relax. There’s enough grind in my life as it is. I don’t like looking at the empty, dated pages of a printed book and feeling as though I’ve failed.

So, a different strategy. I’ll write in this journal when I have something to say.

I do like keeping track of what I grow, but I’m not going to be regimented about it.

Today, I planted the color corners of my patio garden on the back deck. As my tolerant friends are aware, I have some weird animistic tendencies. One of the ways I indulge them is by honoring the four directions (quarters, winds, seasons – as you like) and their corresponding elements. Last year I decided to plant a pot for each direction on the deck. That gave me so much pleasure! So I did it again this year. 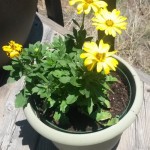 East is the home of air, my favorite element (I’m an air sign, if you like astrology). The season for East is Spring, and its color is yellow. This year I planted some sunny yellow Osteopermium. It looks so cheerful! There are also some marigolds in another pot, seeded from last year’s yellow plant. They are going to be splendid. 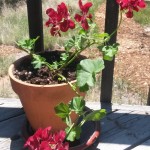 On to the South, home of fire and Summer. Last year’s red geranium made me think fondly of my father, who enjoyed them. So another red geranium this year, and in a second pot, dianthus. 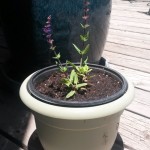 West, home of water and Autumn, is always an important direction in New Mexico. Much of our rain comes from the west. The greenhouse I visited didn’t have the blue flowers I wanted, so I planted a salvia, which is really more purple. I will look for a delphinium, and I’ll probably also get a blue hydrangea. Had one last year and enjoyed it very much. 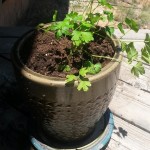 Finally, North is the home of earth and Winter. Its color is green, which gave me something of a quandary last year. There aren’t many green flowers. Finally I realized that green is the vibrant expression of herbs. I love growing fresh herbs to cook with, so last summer I made the North corner of the deck into the herb corner, led by parsley which is about as green as you can get. Along with parsley one must, of course, have sage, rosemary and thyme. I planted all of those last year, but because I came late to the idea I bought commercially grown plants, and none of them survived the winter.

This year I grew parsley from seed, but I started late, so again I resorted to a greenhouse plant and the seed starts will follow. I went to a local greenhouse so with luck they’ll be better adapted. I moved some baby thyme plants from the overflowing thyme beds, and will seek out sage and rosemary. Last year’s rosemary plant was so happy in that corner, I was surprised it didn’t winter over. It does get rather cold here – my other rosemary plant, at the south side of the house against a sunny wall, still struggles. Maybe I’ll mulch everything with straw this fall.

So that’s the four directions honored on the back deck.

Planted more dianthus (they came in a 6-pack) in flower pots. Also planted three of the Sweet Millions (cherry tomatoes) that I grew from seed. There are more plants waiting. Lots of tomatoes this year!

Also waiting are some petunias for the hanging pots, and some other little things for flower pots. I’ll probably tackle those tomorrow. It’s getting hot.