Saturday morning, we woke to snow. We took photos of the truck (now banished from the garage) to advertise it for sale. We took a test run around the lower part of our driveway, which is a loop, to see how the Tesla did in about four inches of snow.

We were glad to be testing the car’s capability on the way out of our driveway rather than trying to get to the house. My spouse took the driver’s seat while I watched, ready to take emergency measures. With luck, the car would pack the snow down a bit so that the front-wheel drive Camry could get out. If the Tesla got stuck, the way would still not be blocked for the Camry to leave the driveway.

My spouse backed the Tesla out of the garage, navigated the uphill side of the loop, and swung around to the downhill side. It got through back up to the top, but slipped just a little at the deepest point. We decided not to push our luck, and put it back in the garage.

By the way—the wall-mounted Tesla charger in the garage plays this neat animation when it’s charging; a green light “drips” down the front of it to show that power is going into the car. The first of many fun discoveries we made.

We spent hours that weekend sitting in the car in the garage, poking through the options on the touch screen, learning our way around the controls. The entire Tesla owner’s manual, in electronic form, is accessible from this screen. Each driver’s fob is also the key to that driver’s profile, which includes all kinds of settings from seat and steering wheel position to configuration of the smaller dashboard display. We learned a lot, but we still had a lot to learn.

We continued our long discussions of what prestige plate to apply for. In our state, you list your top three choices and if you get one of them, you’re lucky. You won’t know until the plate arrives in the mail.

Some of the options we talked about, we later saw on other Teslas in New Mexico. We decided our first choice was “Nikola,” in honor of Nikola Tesla, the inventor of the electric motor that drives the car. We had seen this on plates from other states, but not on a New Mexico plate. Other options we considered included “Charged” and “Amped.”

On Sunday, the sun had melted the snow down a bit, and we decided to try taking the car out of the driveway. We took this photo at the bottom of the driveway: 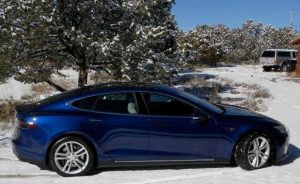 We then held our breath as we headed up the steep gravel drive.

The Model S is massive: two and a half tons. A third of that is the battery, which gives it a low center of mass and plenty of traction. As long as the snow isn’t so deep that the car high-centers on it, we can get in and out of our driveway.

A few days later, we took the car to Albuquerque to register it. That was the occasion of our first “Tesla moment.”

We did not coin that term. Probably someone on the Tesla forums did. It refers to a moment when a Tesla owner interacts with a stranger about the car, usually when that person shows interest or appreciation. There’s a whole board on the Tesla forums devoted to Tesla moments.

Ours happened at the Motor Vehicle Division, when we were registering the car. The clerk who handled our application made an appreciative comment about how pretty it was. (Apparently she was able to bring up a picture by accessing our VIN—complete with Deep Blue Metallic.) We had a nice chat with her about how great the car was, paid the registration fees and submitted our list of prestige plate choices, and left feeling happily bemused, with fingers crossed for getting our top pick.

Tesla moments do not get old. At least, for us they haven’t. Each one is different, and they’re always fun. They’re part of our job as ambassadors for the electric car. Whenever either of us has been driving the car, we report on any Tesla moments we had.

Monday came around. Snow was melting off, and it was time for the spouse to head to work. He took the Tesla, smiling all the way, I’m sure. Since I work at home, we decided he would drive the car whenever I didn’t need it for errands or meetings. The Tesla costs less to drive than the Camry, so it makes sense for us to be putting most of our mileage on that car.

Gradually, we spread our wings a little more. The next weekend we drove the car all the way to Santa Fe, to meet my siblings for lunch.

On a long, straight stretch of state highway, I suggested that my spouse (who was driving), do something I did on my test drive, which he hadn’t had the opportunity to do on his. He came to a complete stop, making sure no other cars were around, then floored it.

The first word out of his mouth was unprintable.

The next thing he said was, “My eyes!” because the “launch” had pressed them back in his skull.

Our car actually has something called “Launch Mode.” (Not Ludicrous Mode—that’s a part of the power package option, which we didn’t get.) Launch Mode gives you just a bit of a boost during a cold start, to up the zero-to-sixty speed. We have never turned it on. The car is scary enough without it.

On that drive we also started to learn about the differences between the car’s estimated range available and the actual range we would get out of it. Things like using the heater (and, um, “launching”) drain power from the battery, affecting the range (more on that later).

We were learning new things about the car every day. We planned an overnight trip for a weekend in January, to test the range capability. We have a favorite historic hotel along I-40 west of Albuquerque: La Posada in Winslow, Arizona. On a normal road trip, we stop there for lunch in the amazing Turquoise Room. On this trip, we planned to stay overnight and drive home the next day, partly because La Posada has a “destination charger.”

This is the exact same kind of charger we have in our garage. When there’s one at a hotel, restaurant, or other public-access place, it’s called a destination charger. They show up on the GPS display on the Tesla touchscreen, so as you’re driving along you can find the nearest charger. You can also look them up on the Tesla website under “Charging.” You can display Tesla Superchargers the same way. More on that later.

At the third holiday party, one of the people we invited to sit in the car sat staring at the displays, and said, “I feel like I’m sitting in the future.”

Yes, my friend. You were. This car—this Magical Space Car—is real, and it’s the future.

I don’t remember exactly when, but somewhere around the holidays, we got a big, flat envelope from the Motor Vehicle Division. My spouse snuck it out of the house, and then invited me to come look at the car, which he had parked in the driveway. 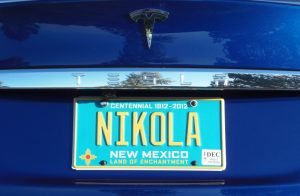