The Tesla Diaries: 9. The Future

We are living in an amazing time for technology. As I write this, I’m still glowing from watching the successful test launch of SpaceX’s Falcon Heavy. The payload included Elon Musk’s original Midnight Cherry Tesla Roadster, with a spacesuit-sporting dummy driver named Starman. There’s a towel aboard (for you Douglas Adams fans), and a sign that says “DON’T PANIC!” in large, friendly letters, and a set of Asimov’s Foundation trilogy. Starman and the Roadster went into orbit to the accompaniment of David Bowie’s “Space Oddity.” They are destined for Mars.

Say what you will of Elon Musk, the man is both a consummate geek and a superlative showman.

Back here on Earth, I have high hopes for our future. Despite social chaos, humanity is making some really important strides right now. The change from using fossil fuels to using renewable energy (solar, wind, etc.) is just one part of it—though it’s a very important part.

Humanity wants clean energy. Humanity wants electric cars. When I first started paying attention to Tesla, over five years ago, I had hopes that humanity would embrace this tech. Humanity appears to be going wholeheartedly in that direction.

When Tesla announced the Model 3 back in 2016, they immediately got hundreds of thousands of reservations. My spouse and I put our money down for one. Now, in early 2018, we are finally seeing production of the Model 3 ramping up.

At $35,000, the Model 3 isn’t cheap, but it also isn’t stupid expensive. It’s within reach for many more people than the Model S and Model X. And it’s every bit as cool as the Model S.

I’ve now had the chance to touch a Model 3 and sit in it. Oh, it is beautiful. There are differences: it’s slightly smaller than the Model S. It doesn’t have a hatchback. It has fewer bells and whistles, though eventually there will be plenty of fun add-ons. We are having to wait to order ours, as we need AWD where we live and it’s not yet available. But in a few months, we’ll be going to the Tesla website’s Design Studio and rezzing up our 3.

The Model S shook up the automotive industry. The Model 3 is even more a game-changer. It is what’s called a disruptive technology, like the e-reader. Remember when Amazon launched the Kindle? Ebooks changed, and are still changing, how we read and publish books.

Watch for the Model 3 to do that. It’s already happening. Other manufacturers are scrambling to compete with Tesla. Many of the features we found so novel when we got Nikola are now being offered on other cars—ICE cars, and hybrids—but there are also new all-electric cars coming. This is good! There’s no way Tesla can meet the demand for electric vehicles. All the auto-makers need to start making them. That’s why Musk gave away the patent for Tesla’s electric motor.

Within a decade, gas stations will be fading out of existence. The air will be cleaner, and drivers will be a lot safer because of advances in technology.

We live in an amazing time.

I know that I am extraordinarily lucky. I count my blessings every day, and I’m deeply grateful for all of them. More than that, I want all my fellow humans to be equally blessed. There’s no reason they shouldn’t be, and I believe we can work together to make it happen.

Keep your heads up, humanity, and keep your eyes on the stars. And when you get a chance, take a ride or a test drive in a Tesla. 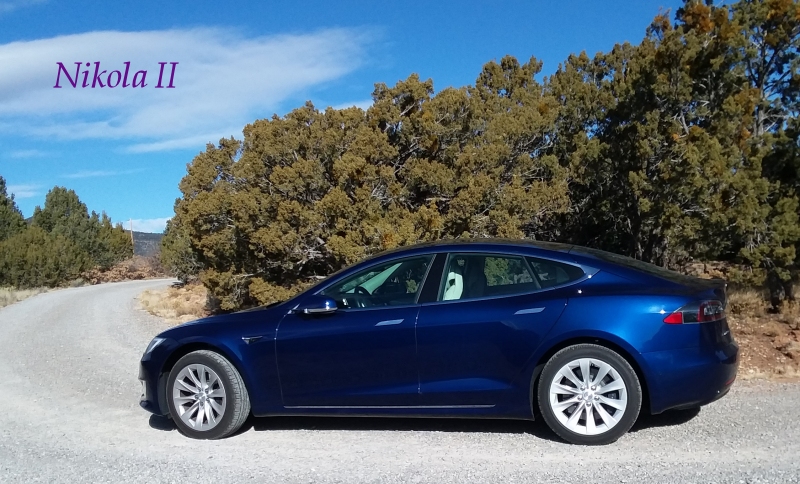 Or just go to Tesla.com and play with the design studio! You can whip up your dream car online without committing to buy.