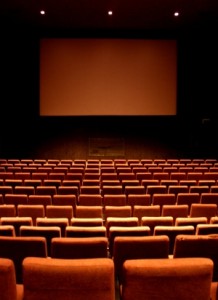 I love movies, but I don’t go to the movie theater much any more. I can’t enjoy films there like I used to. Why?

I have partial hearing loss, in a specific way that makes it hard for me to understand what people are saying. My weakest frequencies are those where the consonants in speech occur, so to me it sounds like everyone is mumbling.

I have hearing aids. They help, but I still miss a lot. They are also uncomfortable (a different issue that I’ll pass over today).

Even with the hearing aids, I have to concentrate, hard, just to participate in a conversation, and I do a lot of guessing anyway. Add to that the additional sounds in a movie soundtrack–music (often too loud) and sound effects–and I miss out on a lot of the dialogue. So I prefer to watch movies at home, where I can turn on the captions.

Movie theaters sometimes have helpful devices that can be borrowed by the “hearing impaired.” The most common of these are headphones. Thanks, but all that does is amplify the mishmosh and give me a headache (see “I have hearing aids” above). 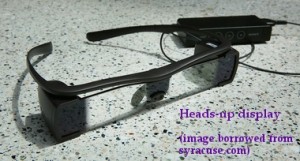 A more helpful device is a gadget that displays captions for the movie. I’ve tried two kinds – one is a high-tech visor thingie that projects a heads-up display of closed captions. Pretty good, but there’s no control over where the captions appear, and I had to hold my head at a fatiguing angle to see both them and the movie. Also, they’re kind of heavy, so…headache. And I suspect they’re expensive; I’ve only been offered them at one theater and they held my driver’s license hostage while I was using them. 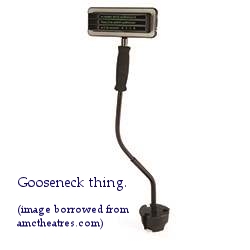 The other gadget I’ve tried is a low-tech dot-matrix display (like on traffic message signs) on a gooseneck attached to a weight that plugs into a cup holder. The gooseneck can be used to position the display comfortably. Unfortunately this can lead to the thing falling out of the cup-holder.

Both these gizmos are OK, if slightly inconvenient, but I’ve found that the majority of the time, they’re not available. This may change, according to this article in the Los Angeles Times, but theater owners don’t like the potential cost. AMC is apparently going to make the gooseneck thing available in all their theatres.

But maybe there’s an easier way.

I have this high-tech electronic device that I paid for with my own money. It’s called a tablet. If it could receive a broadcast of closed-captioning, I’d be happy to bring it with me to the movie theater. I could put it on a little gooseneck or telescoping handle of my own, tune it in to the correct movie broadcast, and voila. Inexpensive for the theater, convenient for me. They could keep a couple of loaner tablets on hand for people who don’t own one. Way cheaper than the high-tech headache-inducing headsets, or the heavy gooseneck cupholder things.

So I’m tossing this idea out into the ether, for any techie who might feel like picking up on it and making it real. You don’t have to pay me a cent. Just make it happen, OK?